World Myths and Legends: 25 Projects You Can Build Yourself (Build It Yourself) (Paperback) 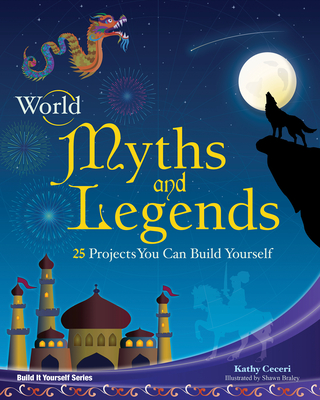 World Myths and Legends: 25 Projects You Can Build Yourself (Build It Yourself) (Paperback)

World Myths and Legends retells tales from the Middle East, Europe, Africa, Asia, Australia, and the Americas. From the Greek myths to ancient epics like Gilgamesh and the trickster tales of Anansi the Spider, it helps readers think about why the same themes, characters, and events may show up in different parts of the globe. Along the way kids will also find lots of fun and interesting projects that let them experience the stories first-hand. World Myths and Legends unveils wonders of the ancient world as it takes readers on a fascinating adventure of mystery and imagination.
Kathy Ceceri is About.com's Homeschooling Expert and a fan of art mixed with science. Her books include Robotics: Discover the Science and Technology of the Future, named Best of the Best by the Chicago Public Library, and Geek Mom: Projects, Tips, and Adventures for Moms and Their 21st-Century Families. She lives in Upstate New York. Shawn Braley is an award-winning illustrator. He attended the Joe Kubert School of Cartoon and Graphic Art, Inc. He specializes in cartoon and editorial illustration. Braley is also a world traveler, musician, cat owner, and comic art collector.

"An excellent introduction to the cultures and myths of a diverse selection of peoples, and one I highly recommend to home-schoolers in particular . . . The projects themselves are extremely varied, and go beyond simple craft-ness. For instance, one activity for the Greek section is to use Euclidian geometry to make an equilateral trianglefun with compasses!"  Charlotte's Library Blog

"Another in the well-done 'Build It Yourself' Series. Sidebars, eye-catching illustrations, and explanatory text accompany the hands-on activities that will take you on a world-wide adventure you won't forget." Calliope