My Epidemic: An AIDS Memoir of One Man's Struggle as Doctor, Patient and Survivor (Paperback) 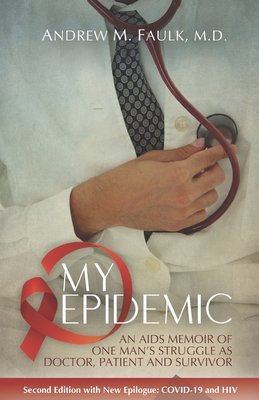 My Epidemic: An AIDS Memoir of One Man's Struggle as Doctor, Patient and Survivor (Paperback)

"A captivating true story of courage in the face of near-hopeless odds, My Epidemic fills a gap in the staggering history of AIDS. Here is a perspective few would ever know: an AIDS practitioner who continued his desperately needed work in the early, worst years of the epidemic, even though he himself was HIV positive. Dr. Faulk's spare, tell-all, yet compassionate voice takes readers on a harrowing but inspiring journey, an experience that ends, miraculously, with survival."-Jerry Rosco, Author of the biography Glenway Wescott Personally and editor of the Lambda Literary Award winning journal A Heaven of Words.

WHEN YOUNG DR. ANDREW FAULK first learned he was HIV-positive, he was devastated for it certainly meant imminent death. Until then, he'd been an outstanding physician with years of intensive training. That day, facing the great divide of his life, he considered abandoning his medical career. But seeing the staggering needs of the gay community, he dedicated the remainder of his life to the fight against AIDS. Ultimately, Faulk participated in the care of approximately 50 patients who died, many his own peers, including his partner.

Being HIV-positive, Faulk discovered something other doctors didn't experience-in every patient he cared for, whatever the symptoms, he saw himself. As patients and friends died around him, at any time he, too, could have "stepped off the earth." Yet with intuition, insight and compassion, he brought peace and comfort whenever possible to those under his care. Now, after years of silence about his painful past, Faulk recounts those heroic years and tells this, his true story as doctor, patient and survivor.

In a thoughtful epilogue, Faulk also compares the HIV and COVID-19 pandemics and explores the underlying deficiencies in the American healthcare system that left the nation vulnerable to the devastation of the coronavirus.

"My Epidemic gives a voice to doctors around the world dealing with HIV/AIDS both externally and internally. There are few descriptions of how it feels to practice medicine in the midst of an epidemic. To someone who practiced HIV-medicine during those years, the physical and emotional demands and the ethical and moral dilemmas ring true. Andrew Faulk is a survivor, not cured but managing in spite of his disease. He has learned the most important lesson of dealing with HIV/AIDS or any serious chronic disease; what is important is living, not dying."-Donald P. Kotler, M.D., AIDS Research, Albert Einstein College of Medicine.

"Dr. Andrew Faulk has written a brilliant and courageous book that gives us an inside account of how this highly regarded physician treated some of the earliest patients of the AIDS epidemic. This really is a story about the mistreatment of a minority group that was dying before the world's eyes-within the gay community and beyond. Taking us through his rollercoaster experience as a doctor treating sick patients, Dr. Faulk continues to show compassion-even as he himself becomes an AIDS patient. While the epidemic kills many of his friends, patients and neighbors, Dr. Faulk manages to survive, regain aspects of his life, and with this book he not only reminds us of a generation that was lost but leaves us with a message of hope."-Lawrence Otis Graham, Esq., New York Times bestselling author of Our Kind of People: Inside America's Black Upperclass