Off to Be a Soldier, With a Daily Letter to My Wife (Paperback) 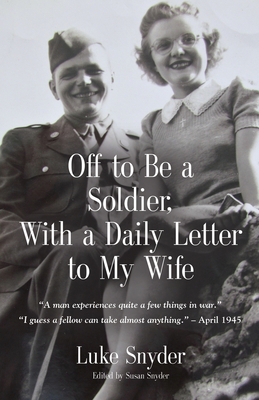 Off to Be a Soldier, With a Daily Letter to My Wife (Paperback)

Luke Snyder, from small town Leesport, Pa. inducted into the Army July 1944, relates his military experiences through his daily letters to his wife Ruth. Over 330 letters were written over 16 months. His concise narrative walks us through Basic and Medical training at Camp Barkeley, Texas, his assignment to the 10th Mountain Division at Camp Swift, his battle experiences in Northern Italy at Mt. Belvedere, crossing the Po River, and his Army discharge from Camp Carson, Colorado. His compulsion to write has him penning letters after "lights out" in the latrine, under the lamp posts outside his barracks, and by "candlelight" in his "foxhole".

He returns to the States in September 1945, is assigned to Camp Carson only to find out his beloved 10th Mountain Division is being deactivated. As the acting Regimental Mail Clerk, he watches soldiers reassigned or discharged awaiting his own military fate. To be home for Christmas is his greatest desire.

This day-to-day recount from a soldier makes real the trails soldiers endure; the extreme pain of loss they may be unable to express and the yearning for letters that keep them connected until they're able to come home.