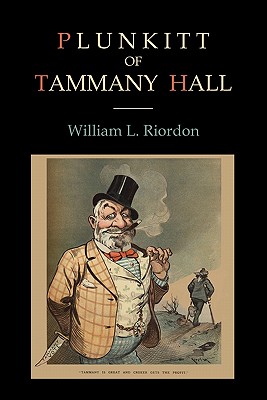 2010 Reprint of 1905 edition. "This brief classic of streetwise politics was published in 1905 after first appearing as a series of newspaper stories. George Washington Plunkitt was a sort of middle manager of one of the greatest political machines in U.S. history, Tammany Hall, which held power in New York City for much of the period between the Civil War and the 1930s. Most of its men died rich; a few spent their last years in jail. Plunkitt was one of the smarter and luckier ones. And he's remembered today by historians because he was the only one who talked, openly and on the record, to a reporter from the "New York Evening Post" named Riordan, about how to get and keep power. Riordan published Plunkitt's musings from his "office" (a shoeshine stand in the New York County Courthouse) straight, without comment or gloss, and preserving Plunkitt's speech rhythms and slang. The result is a little like hanging out with a Dickens character for an hour or so; the guy is colorful, unabashed when distinguishing between "honest graft and dishonest graft," and at times remarkably prescient: "The Democratic party of the nation ain't dead, though it's been givin' a lifelike imitation of a corpse for several years. . . . The trouble is that the party's been chasin' after theories and stayin' up nights readin' books instead of studyin' human nature and actin' accordin' . . . ." David Loftus.