The Myth of Russian Collusion: The Inside Story of How Donald Trump REALLY Won (Paperback) 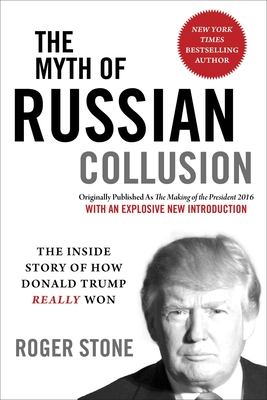 The Myth of Russian Collusion: The Inside Story of How Donald Trump REALLY Won (Paperback)


Contact the store regarding this book
New York Times bestselling author Roger Stone’s insider tell-all about the presidential campaign that shocked the world.) Stone continues to be front page news and his updated book responds to the charges made by Robert Mueller.

Two years ago, Roger Stone, a New York Times bestselling author, longtime political adviser and friend to Donald Trump, and consummate Republican strategist, gave us Making of the President 2016—the first in-depth examination of how Trump’s campaign delivered the biggest presidential election upset in history. But since then, the Deep State political establishment has worked tirelessly to undo those results. The Myth of Russian Collusion adds to and updates Stone’s initial work to set the record straight.

Trump’s election win was a resounding repudiation of the failed leadership of both parties. The American people wanted something new, and President Trump has delivered: his tax cuts and regulatory rollbacks have given us the strongest economy in American history, he is relentless in his efforts to protect American citizens, and he refuses to do business as usual.

But America’s ruling elite and liberal media, feeling threatened, have conspired to create the biggest witch hunt in our country’s history. The phony narrative that Trump was in cahoots with Vladimir Putin, Mueller’s charges that Roger Stone knew about the Wikileaks emails before release—all is debunked here. With a new introduction that responds to the Mueller investigation, The Myth of Russian Collusion is the true story of the Trump campaign that the establishment doesn’t want you to believe.
Roger Stone is the New York Times bestselling author of The Man Who Killed Kennedy, along with Making of the President 2016, among others. He is a legendary American political consultant and strategist who played a role in the election of Republican presidents Richard Nixon, Ronald Reagan, George W. Bush, and Donald Trump. He was the subject of the smash hit, award-winning Netflix documentary Get Me Roger Stone. You can follow Roger Stone’s political analysis at StoneColdTruth.com.
"Roger's a good guy. He is a patriot and believes in a strong nation, and a lot of the things that I believe in."—President Donald J. Trump

"This is the definitive inside account from someone who was with Trump from the beginning."—Judge Andrew Napolitano

"Breathtaking in its scope and detail, Stone explains how Donald Trump pulled off the greatest upset in American political history."—Alex Jones

"No one, and I mean no one has a better, more direct and comprehensive view on the rise and rule of Donald Trump than Stone."—Dr. Theodore Roosevelt Malloch

"We are living in the age of Stone. Indeed his journey from a Dick Nixon 'Dirty Trickster,' to Donald Trump's man in the trenches, does roughly mirror the trajectory of the American right."—Variety

"Stone has been a colorful and at times maligned figure in the Republican Party who relishes political combat and playing a role in causing or exposing unseemly scandals."—Washington Post

"Stone is one of the best known—and best dressed—political insiders in New York."—Breitbart.com

"Watching Stone is like watching a well-dressed cobra at rest."—Esquire

"Possibly The Most Dangerous Man In Politics."—MSN.com

"Trump without Stone is akin to George W. Bush without Karl Rove or Barack Obama without David Axelrod."—National Review

"What makes Stone such a tour de force is his ability to impact the campaign of both candidates."—Redstate.com

"Stone is one of the best sources in Washington for 'inside dirt.'"—Slate.com