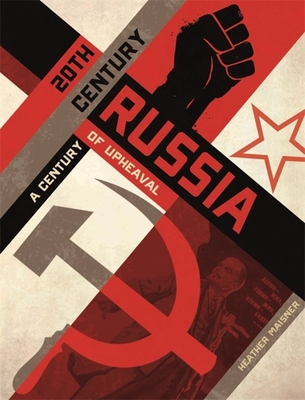 1917 saw one of the most dramatic revolutions in world history when the workers of Russia united to throw out their tsar and aristocracy, and formed the first communist state. A century later, this book reflects on the reasons for this revolution, key people, events and its legacy.

Illustrated with archive photography, posters and artefacts, and supported by eyewitness accounts, this book explores Russia's century of upheaval. It considers how change affected not only people such as Lenin, Stalin and Tsar Nicholas II, but also the ordinary Russians. It explores the roles of the Bolsheviks, the Mensheviks and the secret police, and it also looks at the arts, education, family life, sport, and the revolution's impact on global politics and cultural attitudes. The twentieth century was also dramatic in terms of world politics and this book examines all of this change within the context of the First World War, the Second Word War, the Civil War between the Reds and the Whites and the Cold War. It explores Perestroika and Glasnost and how 21st-century Russia emerged from the collapse of the Soviet Union.

For children aged 12+, this book is especially aimed at history students who are studying the Russian Revolution and Russian history. Heather Maisner studied Comparative Studies, English and Russian at university and has translated books from the Russian. The highly respected Russian historian, academic and author of many books on the subject, Geoffrey Hosking, has acted as consultant. He is the Emeritus Professor of Russian History at UCL, and has published a number of best-selling books on Russia.

Heather Maisner is author of over 30 children's books, translated into 8 languages, including the award-winning Magic Hourglass, Magic Globe and Diary of a Princess. She also teaches creative writing to children.

Her books range from picture books to books for fluent young readers to historical non-fiction. Many of her books combine fiction with fact and games with information, they are ideal for beginner and reluctant readers.

A comprehensive book, packed with authoritative information
—Parents In Touch

Heather Maisner carefully analyses the rise and fall of Soviet Union, with excellent, succinct explanations of the various events. This is a handsome, well-produced book (with stimulating photographs, paintings and posters) and can be highly commended.
—The School Librarian

Perfect for the KS3 history curriculum
—Parents in Touch