Ameritopia: The Unmaking of America (Paperback) 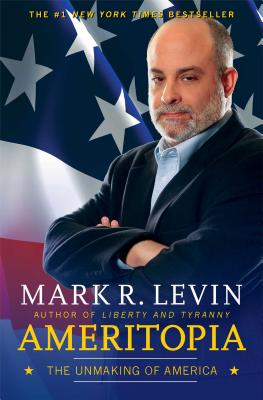 Ameritopia: The Unmaking of America (Paperback)


Usually Ships in 1-5 Days
In his acclaimed #1 New York Times bestseller, Mark R. Levin explores the psychology, motivations, and history of the utopian movement, its architects—the Founding Fathers, and its modern-day disciples—and how the individual and American society are being devoured by it.

Levin asks, what is this utopian force that both allures a free people and destroys them? Levin digs deep into the past and draws astoundingly relevant parallels to contemporary America from Plato’s Republic, Thomas More’s Utopia, Thomas Hobbes’s Leviathan, and Karl Marx’s Communist Manifesto, as well as from the critical works of John Locke, Charles Montesquieu, Alexis de Tocqueville, and other philosophical pioneers who brilliantly diagnosed the nature of man and government. As Levin meticulously pursues his subject, the reader joins him in an enlightening and compelling journey. And in the end, Levin’s message is clear: the American republic is in great peril. The people must now choose between utopianism or liberty.

President Ronald Reagan warned, “freedom is never more than one generation away from extinction.” Levin agrees, and with Ameritopia, delivers another modern political classic, an indispensable guide for America in our time and in the future.
Mark R. Levin, nationally syndicated talk radio host, host of LevinTV, chairman of Landmark Legal Foundation, and the host of the Fox News show Life, Liberty, & Levin, is the author of seven consecutive #1 New York Times bestsellers: Liberty and Tyranny, Ameritopia, The Liberty Amendments, Plunder and Deceit, Rediscovering Americanism, Unfreedom of the Press, and American Marxism. Liberty and Tyranny spent three months at #1 and sold more than 1.5 million copies. His books Men in Black and Rescuing Sprite were also New York Times bestsellers. Levin is an inductee of the National Radio Hall of Fame and was a top adviser to several members of President Ronald Reagan’s cabinet. He holds a BA from Temple University and a JD from Temple University Law School.

“The companion book to Liberty and Tyranny. . . . Levin’s analysis is deadly to liberalism. . . . Ameritopia is historical X-ray vision in book form.”

“A must-read for Americans of all political persuasions. . . . An honest discussion of the dangers presently facing our country. . . . Levin does a fantastic job.”

“Mark Levin has a unique ability to take complex subjects and boil them down to their essentials.”

“That Levin wrote this book now demonstrates not only his passion for the United States, but his awareness that he is a statesman defending natural law at a pivotal moment in human history. . . . Mark Levin [does] the lion’s share of our shouting—eloquently—with Ameritopia.”