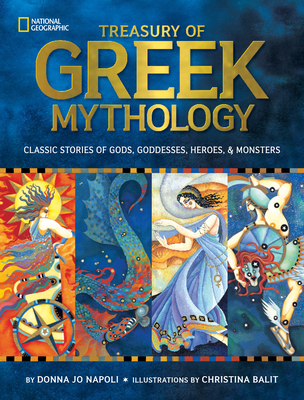 Capitol Choices 2012 list of Noteworthy Titles for Children and Teens

The new National Geographic Treasury of Greek Mythology offers timeless stories of Greek myths in a beautiful new volume. Brought to life with lyrical text by award-winning author Donna Jo Napoli and stunning artwork by award-winning illustrator Christina Balit, the tales of gods and goddesses such as Zeus, Aphrodite, Apollo, and Athena and heroes and monsters such as Helen of Troy, Perseus, and Medusa will fascinate and engage children's imaginations.

National Geographic completes the book with embellishments of each story: sidebars for each god, goddess, hero, and monster link the myths to constellations, geography, history, and culture to help young readers connect the stories to real life events, people, and places. A family tree and a "cast of characters" profile page help make relationships between the characters clear, and a mapping feature adds to the fun and fascination. Resource notes and ample back matter directing readers to more information round out this luminous book. Sure to dazzle all those intrigued with the fantastic tales of Greek mythology and enchant new readers, this vibrant book will soon become a family keepsake.

National Geographic supports K-12 educators with ELA Common Core Resources.
Visit www.natgeoed.org/commoncore for more information.
Donna Jo Napoli is both a linguist and a writer of children's fiction. She received her BA in mathematics in 1970 and her Ph.D. in Romance Languages and Literatures in 1973, both from Harvard University, then did a postdoctoral year in Linguistics at MIT. She is an award-winning author of poetry, novels, and short stories for children. A few of her award-winning children's books include Stones in Water (winner of the Golden Kite Award and the Sydney Taylor Award),Alligator Bayou (a Parents' Choice Gold book for historical fiction), Daughter of Venice (Nevada Young Readers' Award), Albert (Kentucky Bluegrass Award), and Mama Miti (Anne Izard's Storytellers' Choice Award and the Bock Book Award). Donna Jo lives outside of Philadelphia, Pennsylvania. Christina Balit has illustrated a number of children's books, including Atlantis and Escape from Pompeii. Before becoming a prize-winning illustrator, Ms. Balit studied at the Chelsea School of Art and the Royal College of Art in London. She lives in Kent, England.
"This is the kind of rich but accessible reference work school librarians love. It’s  also likely to stimulate fact-obsessed Percy Jackson fans as well as children who have been ordered to research their school papers offline....This is a book meant to dazzle its readers — and it does."   New York Times online