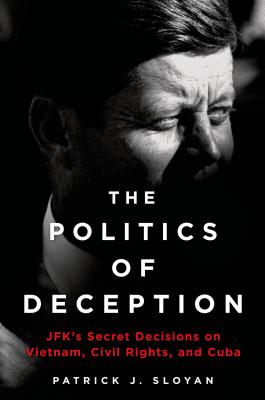 Beneath the myths of Camelot lies the truth of the presidency of John F. Kennedy.

Patrick J. Sloyan, a young wire-service reporter during the Kennedy administration, revisits the last year of JFK's presidency to reveal a ruthless politician.

As the president prepared for his 1964 reelection bid that never was, he buried the truth and manipulated public opinion. Using Kennedy's secret recordings of crucial White House meetings and interviews with key inside players, Sloyan reveals:

President Kennedy's complicity in the overthrow and assassination of South Vietnamese president Ngo Dinh Diem, an event that planted the seed for a decade of jungle warfare and a nation dividedThe secret deal to resolve the Cuban missile crisis that contradicts the popularized "eyeball-to-eyeball" account of Kennedy's dramatic showdown with Soviet premier Nikita Khrushchev, who outfoxed the American president.Kennedy's hostile interactions with Martin Luther King, Jr., and the president's attempts to undermine the civil rights movement, which he viewed as destroying his reelection chances in the South

The Politics of Deception is a revelatory look into a JFK that few will recognize. Pulitzer Prize winner Sloyan reveals an iconic president and the often startling ways he attempted to manage world events, control public opinion, and forge his legacy.
PATRICK J. SLOYAN was a Pulitzer Prize-winning journalist who had covered national and international affairs since 1960. He was awarded journalism's most distinguished prizes for domestic and foreign reporting, including the Pulitzer Prize for International Reporting and Spot News Reporting, the George Polk Award for War Reporting, the American Society of Newspaper Editors Award for Deadline Writing, and the Raymond Clapper Award for Investigative Reporting. Sloyan wrote for Rolling Stone, The New Republic, The Nation, and The London Guardian. He died in 2019 after completing When Reagan Sent In the Marines.

“This riveting book is a compelling read….With dogged persistence, scrupulous archival work and firsthand interviews, [Sloyan] has turned on its ear the sanitized history of the last year of John F. Kennedy's presidency….[a] solid, reliable narrative.” —The Washington Times

“This study will appeal to general readers and researchers intrigued by the Kennedy mystique and its relationship to reality by showing the pragmatic president as part of a long-standing tradition of hard-nosed decision makers, a fact that tempered his idealism.” —Library Journal

“The Politics of Deception is filled with the drama and dialogue of a best-selling thriller. That's because the stories are factual and its author, Pulitzer Prize-winner Pat Sloyan, is a captivating wordsmith. As a White House reporter, Pat witnessed these events unfold, and his meticulous research on newly released records bolsters this exciting expose of President John F. Kennedy's three biggest crises. Pat's riveting revelations are certain to make you question much of what you learned in history class.” —Don Fulsom, author of Nixon's Darkest Secrets

“Pat Sloyan for five decades has exhibited fierce integrity, honesty, diligence, and factual news judgment like few in his profession. A stickler for journalistic ethics, he has rejected official source journalism whenever truth was the alternative.” —Ralph Nader

“In the fraternity of Washington reporters, Sloyan is a brand name for integrity, hard digging to get at buried truths and hard-wired for accuracy.” —William Greider, New York Times bestselling author of Who Will Tell The People?

“Patrick Sloyan has a sterling reputation as one of America's best reporters for more than half a century. His grasp of the changing American political scene over the decades is second to none. If Pat says it's so it means he has double and triple checked it before writing it. Patrick Sloyan is just about the last of the old breed of shoe-leather reporters and deserves to be read and treasured.” —Joseph L. Galloway, co-author of We Were Soldiers Once...and Young, We Are Soldiers Still, and Triumph Without Victory: A History of the Persian Gulf War

“Pat Sloyan, like me, was for years president of the Fund for Investigative Journalism so I'm familiar with his work. Let me just say that after almost 40 years with the Washington Post and now scholar in residence at American University's Investigative Reporting Workshop, I know more reporters than I can count: bad, indifferent, good, and great. Pat is one of the great ones.” —George Lardner Jr.

“Pat Sloyan is as good as it gets in my business...it's really appropriate that he has chosen to write about lying at the top -- he has seen firsthand the results of such lies on the battle field.” —Seymour Hersh, Polk Award and Pulitzer Prize-winning investigative journalist

“Any reportage by Pat Sloyan over the last fifty years has had one singular trait, it is bound to be unassailably accurate.” —James Srodes, author of On Dupont Circle: Franklin and Eleanor Roosevelt and the Progressives Who Shaped Our World

“The Politics of Deception should rank as one of the best books written about the relationship between presidents and the press. New insights and new history from a great reporter who has been there and everywhere.” —Richard Reeves, New York Times bestselling author of Daring Young Men and President Kennedy: Profile of Power

“Pat Sloyan does not scare easily. His integrity, his courage, his quiet ferocity and his common sense have long inspired his admiring colleagues.” —Roger Mudd, Peabody Award- and Emmy Award-winning news anchor