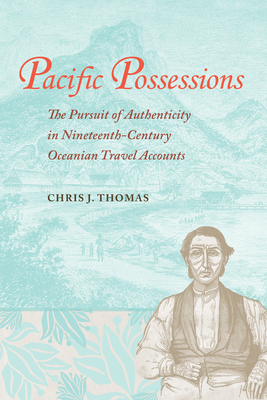 In Pacific Possessions: The Pursuit of Authenticity in Nineteenth-Century Oceanian Travel Accounts, Chris J. Thomas expands the literary canon on Polynesia and Melanesia beyond the giants, such as Herman Melville and Jack London, to include travel narratives by British and American visitors. These accounts were widely read and reviewed when they first appeared but have largely been ignored by scholars. For the first time, Thomas defines these writings as a significant literary genre.

Recovering these works allows us to reconceive of nineteenth-century Oceania as a vibrant hub of cultural interchange. Pacific Possessions recaptures the polyphony of voices that enlivened this space through the writing of these travelers, while also paying attention to their Oceanian interlocutors. Each chapter centers on a Pacific cultural marker, what Thomas refers to as each writer’s “possession”: the Tongan tattoo, the Hawaiian hula, the Fijian cannibal fork, and  Robert Louis Stevenson’s cache of South Seas photographs.

Thomas analyzes how westerners formed narratives around these objects and what those objects meant within nineteenth-century Oceanian cultures. He argues that the accounts served to shape a version of Oceanian authenticity that persists today. The profiled traveler-writers had complex experiences, at times promoting exoticized exaggerations of so-called authentic Polynesian and Melanesian cultures and at other times genuinely engaging in cultural exchange. However, their views were ultimately compromised by a western lens. In Thomas’s words, “the authenticity is at once celebrated and written over.”
Chris J. Thomas is lecturer in communication skills at Kelley School of Business, Indiana University.
“Thomas’s book reclaims a fascinating and unjustly neglected body of writing that continues to shape our perception of Oceania today. His nuanced readings illuminate the ways in which the Western imagination in the nineteenth century crafted the Pacific, and how in turn encounters with Pacific cultures challenged Western notions of authenticity and identity. Intelligent and lucid, this study of contested cultural markers and the narratives shaped around them is an important contribution to our understanding of the making of a postcolonial and globalized “South Seas”.”
—Charles Adams, author of The Narrative of Robert Adams, A Barbary Captive: A Critical Edition