Assignment Russia: Becoming a Foreign Correspondent in the Crucible of the Cold War (Hardcover) 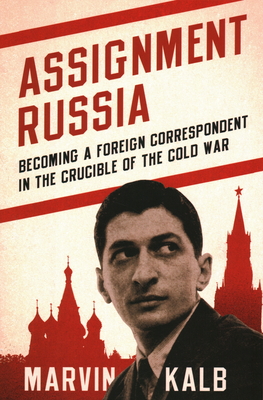 Assignment Russia: Becoming a Foreign Correspondent in the Crucible of the Cold War (Hardcover)

Marvin Kalb, the award-winning journalist who has written extensively about the world he reported on during his long career, now turns his eye on the young man who became that journalist. Chosen by legendary broadcaster Edward R. Murrow to become one of what came to be known as the Murrow Boys, Kalb in this newest volume of his memoirs takes readers back to his first days as a journalist, and what also were the first days of broadcast news.

Kalb captures the excitement of being present at the creation of a whole new way of bringing news immediately to the public. And what news. Cold War tensions were high between Eisenhower's America and Khrushchev's Soviet Union. Kalb is at the center, occupying a unique spot as a student of Russia tasked with explaining Moscow to Washington and the American public. He joins a cast of legendary figures along the way, from Murrow himself to Eric Severeid, Howard K. Smith, Richard Hottelet, Charles Kuralt, and Daniel Schorr among many others. He finds himself assigned as Moscow correspondent of CBS News just as the U2 incident--the downing of a US spy plane over Russian territory--is unfolding.

As readers of his first volume, The Year I Was Peter the Great, will recall, being the right person, in the right place, at the right time found Kalb face to face with Khrushchev. Assignment Russia sees Kalb once again an eyewitness to history--and a writer and analyst who has helped shape the first draft of that history.

Kalb witnessed and interpreted many of the defining events of the Cold War. In Assignment Russia he ultimately finds himself assigned as Moscow correspondent for CBS News just as the U-2 incident--the downing of a U.S. spy plane over Russian territory--is unfolding. Kalb brings alive once again the tension that surrounded that event, and the reportorial skills deployed to illuminate it.

Like The Year I Was Peter the Great, the first volume in a series of memoirs narrating his earlier life, Assignment Russia brings us Kalb once again as an eyewitness to history--and a writer and analyst who has helped shape the first draft of that history.

Marvin Kalb is a former senior adviser to the Pulitzer Center on Crisis Reporting, a Harvard Professor emeritus, former network news correspondent at NBC and CBS, senior fellow nonresident at the Brookings Institution, and author of 16 other books, the most recent of which is the first volume of his memoirs, The Year I Was Peter the Great (Brookings).