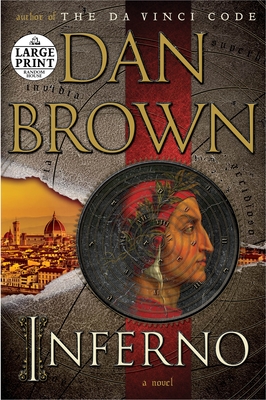 This is book number 4 in the Robert Langdon series.

With the publication of his groundbreaking novels The Da Vinci Code, The Lost Symbol, and Angels & Demons, Dan Brown has become an international bestselling sensation, seamlessly fusing codes, symbols, art, and history into riveting thrillers that have captivated hundreds of millions of readers around the world. Now, Dan Brown takes readers deep into the heart of Italy . . . guiding them through a landscape that inspired one of history’s most ominous literary classics.

“The darkest place in hell are reserved for those who maintain their neutrality in times of moral crisis.”

Harvard professor of symbology Robert Langdon awakens in a hospital in the middle of the night. Disoriented and suffering from a head wound, he recalls nothing of the last thirty-six hours, including how he got there . . . or the origin of the macabre object that his doctors discover hidden in his belongings.
Langdon’s world soon erupts into chaos, and he finds himself on the run in Florence with a stoic young woman, Sienna Brooks, whose clever maneuvering saves his life. Langdon quickly realizes that he is in possession of a series of disturbing codes created by a brilliant scientist—a genius whose obsession with the end of the world is matched only by his passion for one of the most influential masterpieces ever written—Dante Alighieri’s dark epic poem The Inferno.
Racing through such timeless locations as the Palazzo Vecchio, the Boboli Gardens, and the Duomo, Langdon and Brooks discover a network of hidden passageways and ancient secrets, as well as a terrifying new scientific paradigm that will be used either to vastly improve the quality of life on earth . . . or to devastate it.
In his most riveting and thought-provoking novel to date, Dan Brown has raised the bar yet again. Inferno is a sumptuously entertaining read—a novel that will captivate readers with the beauty of classical Italian art, history, and literature . . . while also posing provocative questions about the role of cutting-edge science in our future.
Dan Brown is the author of numerous #1 bestselling novels, including the recent record-breaking The Lost Symbol, which had the biggest one-week sale in Random House history for a single title.  His previous title, The Da Vinci Code, has sold more than 80 million copies worldwide, making it one of the bestselling novels of all time. In addition to numerous appearances on The Today Show, Mr. Brown was named one of the World's 100 Most Influential People by Time Magazine. He has appeared in the pages of Newsweek, Forbes, People, GQ, The New Yorker, and others. His novels are published in over 50 languages around the world
"Jampacked with tricks...A BOOK-LENGTH SCAVENGER HUNT that Mr. Brown creates so energetically."--Janet Maslin, The New York Times

"AS CLOSE AS A BOOK CAN COME TO A SUMMERTIME CINEMATIC BLOCKBUSTER…Brown builds up Langdon's supporting cast, which is the strongest yet."--USA Today

"BROWN IS AT HIS BEST when he makes readers believe that dusty books and musty passageways are just covers for ancient global conspiracies."--The Washington Post

"A DIVERTING THRILLER…Brown stocks his latest book with all the familiar elements:  puzzles, a beautiful female companion, and hints of secret conspiratorial agendas."--EW.com

"Brown gives us lots of history and culture…but he puts the story first. INFERNO IS THE KIND OF SATISFYING ESCAPIST READ THAT SUMMERS WERE MADE FOR."--The Boston Globe