Inside Out Egyptian Mummy: Unwrap an Egyptian mummy layer by layer! (Hardcover) 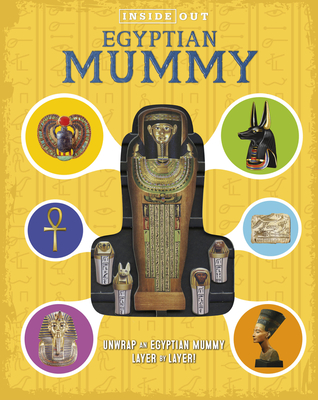 Inside Out Egyptian Mummy: Unwrap an Egyptian mummy layer by layer! (Hardcover)


Usually Ships in 1-5 Days
Calling all explorers and archaeologists! Inside Out: Egyptian Mummy comes with everything you need to start an Egyptian adventure, from discovering a tomb to unwrapping a mummy.

Though the ancient civilization of Egypt may be long gone, its dead still have secrets to tell. From the myth of Isis and Osiris, to King Tut’s tomb, to the intricacies of preparing the body for its underworld journey, Inside Out: Egyptian Mummy takes you step by step into a tomb. Get a fascinating glimpse into how an ancient culture saw death and the afterlife beyond.

That isn't all though! Alongside beautiful illustrations and photographs, an interactive die-cut model reveals the many rites of the Egyptian tomb. You will be amazed by everything from the iconic golden burial mask, to the lucky amulets the dead were buried with, protective linen wrappings, and even the mummified body and preserved sacred organs. And when it comes to hieroglyphics, hidden burial grounds, and missing treasure, there’s always more to uncover, so get your start now, who knows where your journeys will take you!

Lorraine Jean Hopping grew up in small-town Michigan. At the age of twenty-one, she moved to New York City to launch a career in publishing, eventually making her way into the worlds of magazines, books, radio, software, board games, toys, and websites. She began her digital writing career in the 1980s with the adventure story "Escape from Antcatraz" (Scholastic), and her latest digital fictions are Inanimate Alice (narrative designer) and Mayan Mysteries (writer). Currently she enthusiastically explores the overlap between digital fiction, games, multimedia, and interactivity. Hopping lives in Ann Arbor, Michigan. For more information, visit lorrainejeanhopping.com.

"Utilizing a dynamic design and incorporating intriguing bite-size facts, the Inside Out series, introduces younger readers to different objects, mostly involving bodies, by peeling away the layers...Ultimately, an informative introduction that's built around an irresistible conceit." - Maggie Reagan, for Booklist