Goddesses and Heroines: Women of Myth and Legend (Hardcover) 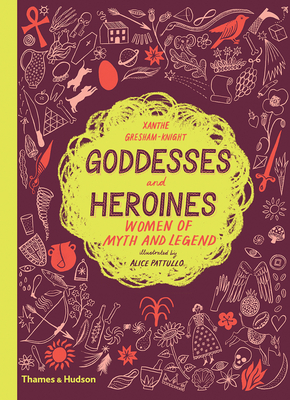 Goddesses and Heroines: Women of Myth and Legend (Hardcover)

Illustrated stories from around the world that celebrate female characters in ancient myths and legends.

Goddesses and Heroines tells the tales of inspirational female characters from ancient myth and legend which all too often go untold. Performance storyteller Xanthe Gresham-Knight draws on original texts and lends renewed relevance to stories from cultures around the world.

We meet the youthful Aphrodite, the girl who created the world through imagination and sheer willpower; Hecate, the math whiz whose political drama on Mount Olympus saw her topple the powers that be; the heroic Mulan, whose bravery, athleticism, and cross-dressing helped her bypass gender barriers in ancient China; Osun, the Nigerian goddess who proved that unless we live as one, we will never truly be free; and the not-so-fair-y Russian godmother Baba Yaga, Goddesses and Heroines is a must-have for young readers who love myth and storytelling.

Xanthe Gresham-Knight is a British performance storyteller. She is a lecturer in drama and storytelling at the University of East London.

Alice Pattullo is the illustrator of An Animal ABC, Pride and Prejudice, and the Pocket Guide series.
A refreshing revival of timeless, magical women that will inspire readers to dream their own stories... This anthology offers accessible versions of the more popular stories… The strength of this collection of tales lies in Pattullo’s colorful and quirky illustrations, which capture the cultural diversity with radiance and energy.
— Kirkus Reviews

A wonderful source for children who wish to act out these legendary tales… Pattullo’s elaborate cartoon-style drawings of the women and their related symbology will provide reach inspiration for costumes… [The] breadth and diversity make the book worth a purchase.
— Booklist