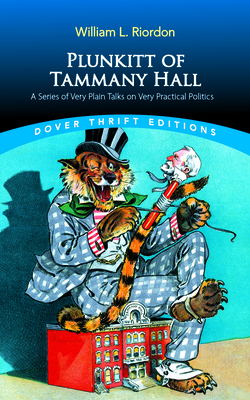 
Usually Ships in 1-5 Days
This classic work presents the candid wit and wisdom of George Washington Plunkitt (1842-1924), a longtime state senator from New York who represented the Fifteenth Assembly District and was especially powerful in New York City. Plunkitt was part of the city's Tammany Hall organization and a cynical practitioner of what today is generally known as "machine politics," a patronage-based system in which politicians openly exercise power for personal gain.
Plunkitt defined "dishonest graft" as working solely for one's own interests, as opposed to "honest graft," which involves the interests of one's party and state as well as individual benefits. An enthusiastic party man, he believed in appointments, patronage, spoils, and all the corrupt practices that were curtailed by the civil service law, regarding them as both the rewards and cause of patriotism. Modern readers will find his strikingly modern-sounding motivations and justifications both entertaining and instructive.
George Washington Plunkitt (1842-1924) was an American politician from New York State. He served in both houses of the New York State Legislature and was a member of the Tammany Hall political machine in New York City. William L. Riordon (1861-1909) was a reporter for the New York Evening Post. His conversations with George Washington Plunkitt, which make up Plunkitt of Tammany Hall, were recorded over a half-dozen years at the turn of the 20th century.