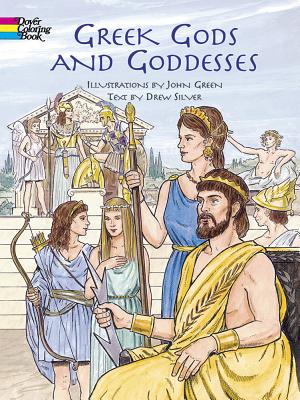 
Usually Ships in 1-5 Days
The deities of ancient Greece are central characters in a body of mythical narratives that were at the heart of a civilization that lasted many centuries. These characters and stories represent imaginatively the Greeks' understanding of nature, psychology, and their own history. They also include strange and spectacular tales of love and lust, war and peace, heroism and vengeance, supernatural feats and superhuman weaknesses -- which may explain their appeal to poets, prose writers, and artists over time, right up to the present day: a stock of themes and images at the historical heart of European culture that still lend themselves to literary and artistic use at every level.
This imaginative coloring book contains 22 memorable images based on the myths and legends of the Greek gods and heroes. Each full-page, ready-to-color illustration appears beside a page of descriptive text. Depictions include Poseidon's wrathful destruction of Odysseus' ship; Apollo slaying the monstrous Python; the return of Persephone from the Underworld; the virgin goddess Artemis; the punishment of Prometheus for bringing fire to mankind; Eos (Dawn) streaking across the sky in her chariot; Hephaistos forging weapons for the king of the gods; Zeus hurling thunderbolts; and 14 other exciting illustrations.
A great way to introduce youngsters to Greek mythology, this collection of mythical images will also appeal to coloring book fans of all ages.
For more than 20 years, John Green has created popular Dover coloring books. He specializes in realistic drawings of people, animals, and places, and his recent titles range from Life in Old Japan to Dogs to Paint or Color.