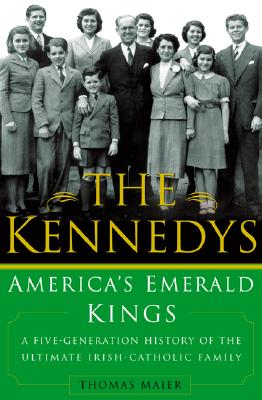 Meticulously researched both here and abroad, The Kennedys examines the Kennedy's as exemplars of the Irish Catholic experience. Beginning with Patrick Kennedy's arrival in the Brahmin world of Boston in 1848, Maier delves into the deeper currents of the often spectacular Kennedy story, and the ways in which their immigrant background shaped their values-and in turn twentieth-century America-for over five generations. As the first and only Roman Catholic ever elected to high national office in this country, JFK's pioneering campaign for president rested on a tradition of navigating a cultural divide that began when Joseph Kennedy shed the brogues of the old country in order to get ahead on Wall Street. Whether studied exercise in cultural self-denial or sheer pragmatism, their movements mirror that of countless of other, albeit less storied, American families. But as much as the Kennedys distanced themselves from their religion and ethnic heritage on the public stage, Maier shows how Irish Catholicism informed many of their most well-known political decisions and stances. From their support of civil rights, to Joe Kennedy's tight relationship with Pope Pius XII and FDR, the impact of their personal family history on the national scene is without question-and makes for an immensely compelling narrative. Bringing together extensive new research in both Ireland and the United States, several exclusive interviews, as well as his own perspective as an Irish-American, Maier's original approach to the Kennedy era brilliantly illustrates the defining role of the immigrant experience for the country's foremost political dynasty.
Thomas Maier is the author of The Kennedys: America's Emerald Kings, which was adapted for Warner Home Video DVD, and the critically acclaimed Dr. Spock, which was a New York Times Notable Book of the Year. He is a special writer at Newsday. He lives in Long Island, New York.
www.thomasmaierbooks.com
"There is a fascinating, five-generation story to tell here, and Maier does it well...this book reads like a metaphor for the Irish immigrant experience itself."—Providence Journal

"This extremely readable biography not only examines one particular immigrant family but also sheds light on the larger story of Irish Americans from the early twentieth century onward."—Booklist

"The door is open and the time is right for another serious, multigenerational history of America's most fabled clan. Newsday reporter Maier answers the need quite well with this fascinating account."—Publishers Weekly

"A colossal work...The Kennedys is a pleasure to read and a legitimate page-turner."—BookReporter.com

"A hefty, well documented, glowing account of the Kennedys as a prime example of Irish Catholic experience in America. He paints a vivid picture of the anti-Irish, anti-Catholic sentiment that faced immigrants with brogues."—Kirkus Reviews

"You can't understand the Kennedys unless you look at their Irish Catholic roots. Thomas Maier has gone far beyond earlier Kennedy biographers and historians to reveal ties that shaped the Kennedys long after they left Ireland. And he's done it in a lively, readable way."—Evan Thomas, author of Robert Kennedy: His Life