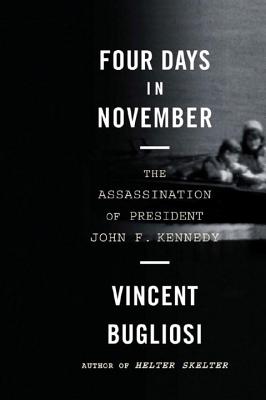 "A book for the ages." —Los Angeles Times Book Review

Four Days in November is an extraordinarily exciting, precise, and definitive narrative of the assassination of President John F. Kennedy on November 22, 1963, by Lee Harvey Oswald. It is drawn from Reclaiming History: The Assassination of President John F. Kennedy, a monumental and historic account of the event and all the conspiracy theories it spawned, by Vincent Bugliosi, legendary prosecutor of Charles Manson and author of Helter Skelter. For general readers, the carefully documented account presented in Four Days is utterly persuasive: Oswald did it and he acted alone.

Vincent Bugliosi (1934—2015), was the prosecutor of Charles Manson and author of Helter Skelter, Outrage, and other #1 bestselling books.
One of the best narrative treatments of the four days from assassination to funeral.
— Wall Street Journal

This is quite simply a book that will be read for centuries.
— Scott Turow, author of Presumed Innocent

What Bugliosi has done is a public service…Reclaiming History is the literary equivalent of World War I, a kind of trench warfare for the mind.

At last, someone has done it, put all the pieces together…With this work, Bugliosi has definitively explained the murder that recalibrated modern America.
— Los Angeles Times Book Review

Reclaiming History is by far the most accurate and detailed non-governmental account [of] the assassination. Bugliosi’s epic book is of great historical significance and should—but probably will not—be the final account of the facts surrounding the assassination. Not only is the book monumental in scope, it is well-written. I…found the account engrossing. It is hard to believe that a work of this length on a well-plowed subject could still be a page-turner.

Absent a trial proving [Oswald’s] guilt, Bugliosi has offered the next best thing: a prosecutor’s air-tight brief that leaves no reasonable doubt…If you read, or even read around in this book and still come to the conclusion that Oswald was part of a conspiracy to kill Kennedy, you are likely to believe that black helicopters have been sent by the feds to enforce the Endangered Species Act…Bugliosi is right that this case is, and ought to be, closed.
— Washington Post

The most exhaustive book yet written about the Kennedy assassination, Reclaiming History is a magnificent…achievement…[Bugliosi] exhilarates the reader with rat-a-tat annihilations of others’ false premises and shaky inferences…[Reclaiming History] will be a kind of eternal flame…There is no question that Bugliosi succeeds in scorching the conspiracy theory terrain with ferocious, even definitive, plausibility.

Reclaiming History is Proustian in its conception, scope and design…Bugliosi’s book, which denies all conspiracies, has the ring of truth—scrupulous, irrefutable truth—and I predict will be the line that historians a hundred years from now will take on this story…If any one book can make you believe the assassination was performed by Lee Harvey Oswald acting alone…this is that book. Few books are as gripping in their narrative, or as telling in their fine detail. This is a book that will make you weep. Powerfully, Reclaiming History evokes the confusion and awful fatefulness, a feeling of the world ripped asunder, that gripped millions at the time.

What Bugliosi has done is reframe the narrative in such a compelling manner, in such an original writing voice, that he essentially shuts the conspiracy theorists down cold. Reclaiming History is the unrushed version of the Warren Commission Report, with all the wrinkles ironed out…Bugliosi lays [the Kennedy assassination] out on a legal pad, pros and cons, discrepancies and all, and comes up with what amounts to an airtight prosecution brief.