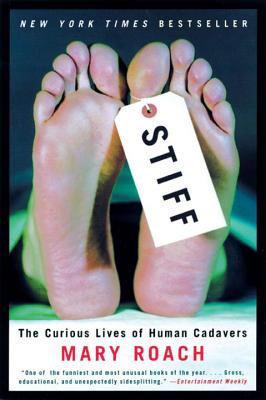 "One of the funniest and most unusual books of the year....Gross, educational, and unexpectedly sidesplitting."—Entertainment Weekly

Stiff is an oddly compelling, often hilarious exploration of the strange lives of our bodies postmortem. For two thousand years, cadavers—some willingly, some unwittingly—have been involved in science's boldest strides and weirdest undertakings. In this fascinating account, Mary Roach visits the good deeds of cadavers over the centuries and tells the engrossing story of our bodies when we are no longer with them.

Mary Roach  is the author of five best-selling works of nonfiction, including Grunt, Stiff, and, most recently, Fuzz. Her writing has appeared in National Geographic and the New York Times Magazine, among other publications. She lives in Oakland, California.
This quirky, funny read offers perspective and insight about life, death and the medical profession.... You can close this book with an appreciation of the miracle that the human body really is.
— Tara Parker-Pope - Wall Street Journal

A laugh-out-loud funny book... one of those wonderful books that offers up enlightenment in the guise of entertainment.
— Michael Little - Washington City Paper

As weird as the book gets, Roach manages to convey a sense of respect and appreciation for her subjects.
— Roy Rivenburg - Los Angeles Times

Mary Roach is one of an endangered species: a science writer with a sense of humor. She is able to make macabre funny without looting death of its dignity.
— Brian Richard Boylan - Denver Post

Roach writes in an insouciant style and displays her métier in tangents about bizarre incidents in pathological history. Death may have the last laugh, but, in the meantime, Roach finds merriment in the macabre.
— Gilbert Taylor - Booklist