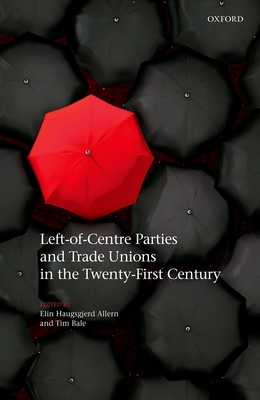 
Contact the store regarding this book
Both parties and interest groups matter to democracy. Historically, examples of close relationships between the two abound. But perhaps the best known - because it was supposedly the most intimate and politically important - is the relationship between left-of-centre parties and trade unions.
Whether rooted in a shared history, culture, and ideology or simply a 'marriage of convenience', the links between them helped socialist, social democratic, and labour parties win power and deliver huge gains to the working class in the post-war period. In recent decades, however, it has been
widely argued that the links between left-of-centre parties and trade unions have declined as their collaboration has become less mutually beneficial, not least as a consequence of structural changes in the economy and labour market. This volume interrogates, qualifies, and even challenges that widespread assumption. Based on a brand new dataset, including organizational gathered by a cross-national team of experts, it uncovers and explores what turns out to be considerable variation in the strength of contemporary
organizational links between parties and unions in twelve different countries that have been democracies since at least the mid- to late-1940s. Testing a series of hypotheses on the importance of on the impact of particular political systems and socio-economic factors, and on the costs and benefits
for both parties and unions, detailed qualitative and quantitative analysis reveals that, left-of-centre party-trade union links are stronger where trade unions are larger, denser, and more unified and where parties are less able to rely on the state to finance their organizational activities and
electoral campaigns. Moreover, it remains the case that the links between parties and unions still matter in policy terms.

Elin Haugsgjerd Allern, Professor of Political Science, University if Oslo, Tim Bale, Professor of Politics, Queen Mary University of London Elin Haugsgjerd Allern is Professor of Political Science at the University if Oslo. Allern's doctoral thesis was shortlisted for the European Consortium for Political Research's Jean Blondel PhD Prize in 2008. Her work has appeared in multiple edited volumes and journals and she is the author andco-author of two monographs in English on Norwegian political parties. In 2012, she co-edited a special issue of Party Politics on parties and interest groups. Currently, she is the principal investigator of new comparative research project party-interest group relationships in contemporarydemocracies. Tim Bale is Professor of Politics at Queen Mary University of London where he specialises in party politics in Britain and Europe. He is the author of books on the Conservative and Labour Parties and on European Politics, and writes about politics for several newspapers and comments on currentaffairs on both television and radio. He is currently directing a project on party membership in the UK.