From the 'Democratic Deficit' to a 'Democratic Surplus': Constructing Administrative Democracy in Europe (Hardcover) 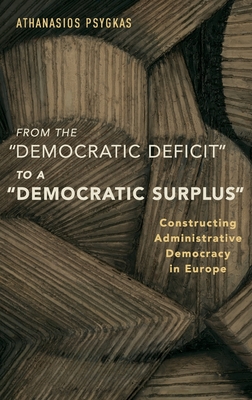 From the 'Democratic Deficit' to a 'Democratic Surplus': Constructing Administrative Democracy in Europe (Hardcover)


Contact the store regarding this book
Challenging the conventional narrative that the European Union suffers from a democratic deficit, Athanasios Psygkas argues that EU mandates have enhanced the democratic accountability of national regulatory agencies. This is because EU law has created entry points for stakeholder
participation in the operation of national regulators; these avenues for public participation were formerly either not open or not institutionalized to this degree. By focusing on how the EU formally adopted procedural mandates to advance the substantive goal of creating an internal market in electronic communications, Psygkas demonstrates that EU requirements have had significant implications for the nature of administrative governance in the member states.
Drawing on theoretical arguments in favor of decentralization traditionally applied to substantive policy-making, this book provides insight into regulatory processes to show how the decentralized EU structure may transform national regulatory authorities into individual loci of experimentation that
might in turn develop innovative results. It thus contributes to debates about federalism, governance and public policy, as well as about deliberative and participatory democracy in the United States and Europe. This book informs current understandings of regulatory agency operations and institutional design by drawing on an original dataset of public consultations and interviews with agency officials, industry and consumer group representatives in Paris, Athens, Brussels, and London. The on-the-ground
original research provides a strong foundation for the directions the case law could take and small- and larger-scale institutional reforms that balance the goals of democracy, accountability, and efficiency.

Athanasios (Akis) Psygkas is Lecturer in Law at the University of Bristol. He has published in the areas of comparative public law, policy and governance, and advised NGOs on these issues. He holds JSD and LLM degrees from Yale Law School, where he was a Fulbright scholar, as well as an LLB and LLMin Public Law and Political Science from the Aristotle University of Thessaloniki, Greece. Akis has held fellowships at the European University Institute, the Institut d'Etudes Politiques (Sciences Po) in Paris, and Yale Law School.