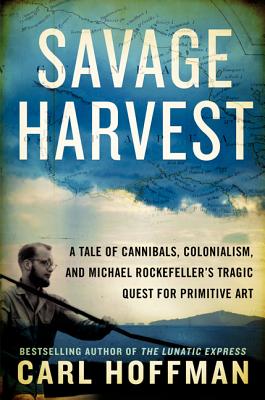 “The tragedy of Michael Rockefeller's death is made far more poignant by the larger tragedy of the environment that surrounded it. Faulty ethnographic assumptions, compounded by unsettling socio-economic factors, bring a depth and pathos to Savage Harvest. A rare balance of mystery and the author's slowly unfolding epiphany of understanding is maintained throughout this riveting and edifying work of nonfiction.”
— Kenny Brechner, Devaney, Doak & Garrett Booksellers, Inc., Farmington, ME

The mysterious disappearance of Michael Rockefeller in New Guinea in 1961 has kept the world and his powerful, influential family guessing for years. Now, Carl Hoffman uncovers startling new evidence that finally tells the full, astonishing story.

Despite exhaustive searches, no trace of Rockefeller was ever found. Soon after his disappearance, rumors surfaced that he'd been killed and ceremonially eaten by the local Asmat—a native tribe of warriors whose complex culture was built around sacred, reciprocal violence, head hunting, and ritual cannibalism. The Dutch government and the Rockefeller family denied the story, and Michael's death was officially ruled a drowning. Yet doubts lingered. Sensational rumors and stories circulated, fueling speculation and intrigue for decades. The real story has long waited to be told—until now.

Retracing Rockefeller's steps, award-winning journalist Carl Hoffman traveled to the jungles of New Guinea, immersing himself in a world of headhunters and cannibals, secret spirits and customs, and getting to know generations of Asmat. Through exhaustive archival research, he uncovered never-before-seen original documents and located witnesses willing to speak publically after fifty years.

In Savage Harvest he finally solves this decades-old mystery and illuminates a culture transformed by years of colonial rule, whose people continue to be shaped by ancient customs and lore. Combining history, art, colonialism, adventure, and ethnography, Savage Harvest is a mesmerizing whodunit, and a fascinating portrait of the clash between two civilizations that resulted in the death of one of America's richest and most powerful scions.

Carl Hoffman is the author of the New York Times bestseller Savage Harvest, hailed as a “masterpiece” by Outside and named a New York Times editors’ choice and one of the Washington Post’s 50 notable works of nonfiction for 2014, as well as The Lunatic Express. He is a former contributing editor to National Geographic Traveler and Wired, and has traveled on assignment to eighty countries.

“[Hoffman’s] reporting takes hold, drawing a vivid portrait of the world of the Asmat people, hunter-gatherers who lived in isolation until the mid-20th century. Gripping.”
— New York Times Book Review

“In an expertly told tale that is begging for a film adaptation, Hoffman crafts a remarkable, balanced examination of this sensational case. . . . [He] deserves much credit for this riveting, multilayered tale.”
— Publishers Weekly (starred review)

“With urgency boarding on obsession, Carl Hoffman retraces Rockefeller’s perilous footsteps. The result is a hypnotic journey into otherness, a wild detective story amid cannibals and headhunters. A thrilling, one-of-a-kind tale -I couldn’t stop reading.”
— Andrew McCarthy, The Longest Way Home: One Man's Quest for the Courage to Settle Down

“A tremendous accomplishment-easily one of the best books I read this year. Carl Hoffman’s acute eye for detail is something to envy. And that closing passage will stick with me for a long, long time.”
— Brendan I. Keorner, The Skies Belong To Us: Love and Terror in the Golden age of Hijacking

“Not only has Carl Hoffman helped solve one of the great mysteries of the last 50 years, he has also written a page turner. An instant classic.”
— Scott Wallace, The Unconquered: In Search of the Amazon's Last Uncontacted Tribe

“A gripping whodunit. . . . a powerful book that succeeds in solving a half-century-old mystery.”
— Wall Street Journal

“Terrific . . . What’s surprising about this book is not the revelation of Rockefeller’s fate but rather the author’s portrayal of a unique cultural encounter.”
— Washington Post

“Hoffman is an intelligent writer…. [the]best kind of non-fiction writing.”
— The Globe and Mail

“A gripping read … he’s erected a solid foundation of reporting that goes far beyond what the rest of us did and is likely to make this the definitive account.”
— Tim Sohn, Slate

“Richly detailed …. nail-biting exposé…Savage Harvest fascinates for the mystery it aims to solve as well as its portrait of an isolated but changing way of life.”
— Chicago Tribune